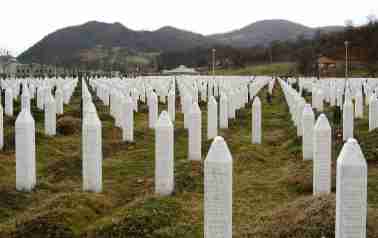 As Suffa Outreach have embarked on a journey and travelled out to Bosnia. A small beautiful country located in the Balkans and only a two hour flight journey from the UK. It’s geography and landscape are as varied as its history. Inhabited by a number of civilisations all of whom left their own unique mark and legacy on this land. Much of this remains preserved to this day. The Muslims through the Ottoman empire have also left a considerable influence and indeed it was through them that the religion of Islam spread throughout this territory and beyond its borders. This can be seen in the architecture of the majestic buildings and great masjids that can be seen throughout the country.
As great as it’s glorious past is we can never forget its more recent bloody history marked by strife and conflict. Often referred to as the greatest catastrophe to affect Europe since the Great War (World War 2) the massacre at Srebrenica can never and must never be forgotten. It is all the more poignant reminder of the true horrors of war and it occurred during our lifetime.
Srebrenica was the site – a small town located to the east of Sarajevo where an estimated 8000 Bosnian Muslim men and boys were rounded up by Serbian Special Forces and brutally massacred. This horrific event occurred in the summer of 1995 whilst the whole world watched. The images were beamed across the world on television screens and displayed graphically on the print media. Who could forget these? They will remain embedded in our memory and remain with us forever.
All of this happened whilst a so called weapons embargo was sanctioned by the UN at the time. The apparent idleness and failure of so called UN peacekeepers and in particular the Dutch forces left the Bosnian Muslims utterly defenceless. Their women were raped and their men butchered by the savage Serbs under the military and political leadership of the tyrants of our time – Radwan Karadzic and Radko Maldizic.
What occurred here should never be forgotten and this tragedy should be held in the same regard and with the same vigour in which we remember tragedies that have happened elsewhere in the Muslim world and beyond and continue to happen to this day.
We were honoured to meet up with a survivor, brother Hasan, who’s father and brother were sadly murdered. His story left everyone in the room emotional and aghast.
22 years this month and lest we forget!