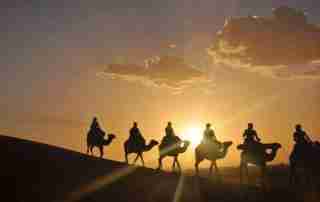 We unjustly tend to overlook the contextual beauty of the Qur’an Immensely. Taking into account when certain Aayaat (‘verses’) were revealed during the lifetime of the Prophet (peace and blessings be upon him) gives new life and depth to Aayaat that we may have otherwise given little thought to.

A beautiful example of this phenomenon of historical context is in Surah Ankabut. Looking at the timing of revelation sheds a profound new light to it.

The first Aayah of the Surah was revealed in the immediate aftermath of an incident that deeply wounded the morale of the budding Muslim community at the time.

One of the companions was brutally burned by coals that were set on his back for refusing to return to his old false belief about God. The gruesome pain of the incident left many Muslims shaken and wondering what God’s role was in all of the turbulence they were facing.

The 2nd & 3rd Aayaat of Surah Ankabut came as a response to this uncertainty.

‘Do people think that they will be let go merely by saying: “We believe,” and that they will not be tested? For We indeed tested those who went before them and Allah will most certainly ascertain those who spoke the truth and those who lied.’

The Surah starts off by addressing the reality of believers having their convictions tested and then begins narrating the stories of Nuh (a.s) and Ibrahim (a.s) with a specific focus on how God saved them from their respective peoples who had turned violently against them.

These narratives not only reinforce patience in the hearts of the believers by pointing to earlier bearers of the faith who soldiered onwards, but also produce hope for eventual deliverance by God.

This contrast highlights God’s ability to rescue the devout from any harm no matter what form it may take.

Prophet Lut (a.s) , another prophet threatened and eventually expelled by his people, is mentioned right after these stories.

As he leaves the unbelieving city of his people,

‘I am making Hijra (a migration) to my Lord. Surely He is the Mighty the Wise.’

This statement by Lut (a.s) is the only one of its kind in the Quran, making it even more fascinating that it’s found in a Surah that was revealed only weeks before the Muslims of Makkah made their own Hijra (Migration).

These tested believers were reciting the words of their prophetic ancestor right before they themselves would be commanded to make the same migration that he did, a migration of faith.

This historic parallel fortified their resolve and fostered a strength and willingness to make the dangerous journey from Makkah to Madinah once its time had come.

After reminding the believers of the necessity of trials for those who believe, reassuring them with the stories of the deliverance of oppressed prophets before them, and inspiring them with the words of another believer before them who made Hijra, Allah places a particularly interesting verse towards the end of Surah Ankabut, (a Makkan Surah – revealed before migration).

Makkan Surahs, of course, are not known to discuss, or even mention the People of the Book such as the Jews and Christians.

‘Argue not with the People of the Book except in the fairest manner, unless it be those of them that are utterly unjust.’

Yet the above ayah is found within it right after the allusion to a coming Muslim migration. This address solidifies and emphasizes the prophecy of a near at hand migration to a land where there would in fact be Jews and Christians, Madinah.

Imagining these prophetic Aayaat being recited on the lips of the companions in the final weeks of the most severe torture in Makkah infuses them with not only more relevance, but also more meaning and power.

A power we should all seek to appreciate and grasp as we recite the same Aayaat 1400 years later.